You are here: Home / Archives for Ships 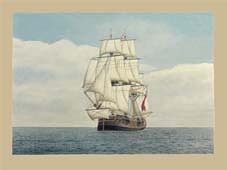 There was not a name more suited to an all male convict transport vessel than Alexander.  Built at Hull in 1783 as a three-mast, two decks with a quarter deck but no galleries or figure-head it was the largest vessel in the fleet, except for Sirius, at 453 tons, 114 feet long and 31 feet wide. Alexander was owned by a Southwark master mariner William Walton, whose company Walton & Co., decided there was money to be made transporting convicts to Botany Bay.  The transport was END_OF_DOCUMENT_TOKEN_TO_BE_REPLACED The store-ship Fishburn was built in Whitby in 1780 and was owned by Leightons, who were also the owners of the Golden Grove and Borrowdale.  Fishburn was the largest store-ship at 378 tons, fully rigged, and 6’1” between decks afore, 5’9” midships and 7’1” abaft.  The commander for her voyage to Botany Bay was Master Robert Brown who in a rare log book entry says they hogg’d ships bottom in preparation for the long voyage.    Fishburn Storeship (Marine Artist Frank Allen)   James END_OF_DOCUMENT_TOKEN_TO_BE_REPLACED

Charlotte, one of the ‘two ladies’ of the fleet, was built on the River Thames in 1784 as a three masted, two-decker, barque built ship, weighing 345 tons. Charlotte was chartered by the Admiralty from its owner Mr Matthews late in 1786.  She was fixed out at Deptford, one of the royal dockyards established to build, repair and victual ships of the Royal Navy.  Her master for the voyage to Botany Bay was Captain Thomas Gilbert. Charlotte carried 88 male convicts and 20 female, among them were END_OF_DOCUMENT_TOKEN_TO_BE_REPLACED

How one London newspaper recorded history Government is now about settling a colony in New Holland, in the Indian seas; and the Commissioners of the Navy are now advertising for 1500 ton of transports.  This settlement is to be formed at Botany Bay, on the west side of the island, where Captain Cook refreshed and staid for some time on his voyage in 1770. As he first sailed around that side of the island. he called it New South Wales, and the two Capes at the mouth of the river were called by END_OF_DOCUMENT_TOKEN_TO_BE_REPLACED Borrowdale, a fully rigged wooden sailing ship, was the youngest of the three Storeships or victualler.  She was built in Sunderland England for the owners Leightons & Co in 1785, two years before the trip to Botany Bay. Once the decision was made to assemble ships for the journey to Botany Bay, the Navy Board advertised extensively for shipping and accepted the tender submitted by William Richards’s jnr.  Borrowdale was fitted out as a transport, and for protection 4 guns were END_OF_DOCUMENT_TOKEN_TO_BE_REPLACED