Owen Cavenaugh (Cavanough) aged 25, arrived into Sydney Cove as an Able Seaman, aboard Sirius.  After Sirius was wrecked on Norfolk Island in 1790, he was discharged to become a settler obtaining land at Cascade Stream, Phillipsburg.  By 1794 Owen was living with
Margaret Darnell who was indicated for stealing, on 30 March 1787, one dozen desert knives and forks, value 6s, being the property of James White.  Sentenced at the Old Bailey on 18 April 1787, to seven years transportation, Margaret was immediately sent to Portsmouth for embarkation on the Prince of Wales.  At Port Jackson, Margaret bore a son Charles by private marine Charles Green.  The child went with her to Norfolk Island on 4 March 1790, and by the June 1790 she was living with Owen Cavanough.  In September 1794 Charles Green made an attempt to reclaim his son, but did not persist further when Margaret was told she could keep him until he was seven.

Having sold his land on Norfolk Island in 1796, Owen, Margaret their two children and young Charles, left the island aboard the Francis for Port Jackson.  Following their return, Owen purchased a boat by which he carried grain to Sydney from his rented land by the Hawkesbury River in the Mulgrave District.  Over the following years, Owen became a successful famer, growing produce and owning live stock on land acquired and purchased.  In 1802 a four acre grant at Ebenezer on the Hawkesbury River was given for the erection of a church, that remains today as the oldest surviving church in Australia.  Owen and Margaret had seven children with Charles Green remaining part of the family.

Windsor and Richmond Gazette NSW, Wednesday 6 May 1953
Internment at Ebenezer Had Local Interest
A Service of special interest to many district residents took place in the historic Presbyterian cemetery at Ebenezer Church on Sunday morning last.

It was the internment of the ashes of the Rev. B. de C. Cavanough, a descendant of Owen Cavanough, one of the free settlers who came to the Hawkesbury in 1803, and who gave the land for the Ebenezer Church and graveyard.

The Rev. B. de C. Cavanough was a chaplain in both World Wars, was Moderator of the Presbyterian Church in Queensland, and for the past 24 years was minister at Sherwood, Brisbane.  He died on September 30 last, aged 71 years. 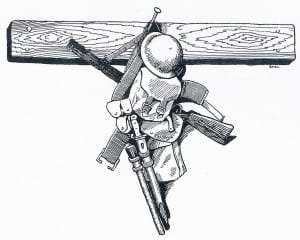