William John Faddy was 2nd Lieutenant of Marines with the 88th Company serving on HMS Champion, Medway and Crescent then in 1783 on Leander. He transferred on 18 February 1784 to 54th Co Plymouth, shortly after marrying Martha.  On 30 June 1787 he was officially instructed to join the Friendship in Phillip’s First Fleet for Botany Bay.  Doing a tour of duty on Norfolk Island, Faddy arrived back in 1791 to Port Jackson on the Queen, before sailing to England aboard the Gorgon. 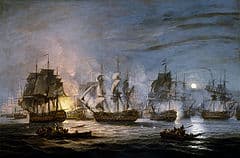 Battle of the Nile by Thomas Luny (Wikipedia)

On 18 May 1793 Faddy was commissioned 1st Lieutenant 76th Company and served on Royal Sovereign in 1794, the flagship of Admiral Cornwallis.  At the battle during which Cornwallis beat off a Dutch fleet four times as large as the British Fleet, Faddy was awarded a medal for his part in the compaign.   Faddy was promoted Captain of the Marines on 24 July 1797 and in December 1797 went aboard Admiral Horatio Nelson’s Flagship Vanguard.  Faddy died of wounds in August 1798 during action at the Battle of the Nile.  He died insolvent; Martha maintained it was his years in NSW that caused their financial difficulties.  Son William was aboard the Vanguard as Cabin Boy.  Admiral Nelson promised to see to William’s education in the Navy.

William Faddy a Midshipman from the age of 8; entered service on the Royal Sovereign.  In 1798 he joined the Vanguard and was wounded in the thigh at the Battle of the Nile (the same battle that killed his father). 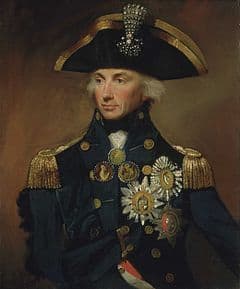 Admiral Nelson took young William under his protection.  He served with Lord Nelson at Copenhagen, and was made a Lieutenant by him in 1804 on Triumph. Faddy was later employed on various ships and was in 1810 made Governor in charge on Isle des Saintes West Indies.  While protecting the route from the French he contracted Yellow Fever and died.  He had been 18 times engaged against the enemy and 11 times wounded, including the loss of his left arm.  Margaret and son William George were left totally destitute. Applying for assistance, Margaret was allowed the usual naval pension of £40 pounds per year.

William George Faddy became a surgeon in the navy on board a ship which did a survey of New Zealand.  Liking what he saw of that part of the country he left the navy and joined a party of three ships to set up a whaling industry in New Zealand.  On the failure of that venture after 4 years he and his wife sophia and two small sons came from New Zealand to Sydney in 1845 and so became the family’s second pioneer, completing the task his grandfather had commenced in 1788.

According to family stories he was first a doctor in the Gladesville Asylum (but no record of this can be found).  The family then moved up north to pioneer settlements in northern New South Wales at Nundle (tin mines) and other places in that district.  His four sons and one daughter have provided the base for a large number of Faddys’ in New South Wales.

In 1994 Ruth discovered that the ANZ Bank has in its museum, a cheque written by her ancestor William Faddy.  The bill went to Cape Town from Sydney (probably on board the Sirius) where it was endorsed by Jansson in 1789, thence to London for payment by Faddy’s agent, Charles Cox, who then forwarded it to Jansson’s agent in Amsterdam.

This cheque for fifteen pounds, the first in a transaction with Mr Jans Jansson (“  this my first of exchange”) and the second bill of exchange are thought to be the earliest surviving Australian financial transactions.  Both bills were offered for sale by Sotheby’s; the ANZ Bank purchasing the first cheque for its museum located in Melbourne.

One of the first cheques from the First Fleet

The Sotheby’s catalogue, in describing William Faddy says “His fellow Lieutenant on the ship, Ralph Clark, described Faddy as a “rotten Pumpkin”.  Ruth had her doubts about this statement and referred to Clarks Journal.  She knew that Clark had complained about Faddy, Meredith and the doctor drinking, arguing and talking so he couldn’t get to sleep, but she had not seen such a description.  Clark’s journal had been used out of context.

Lieutenant Clark writes “3rd Jan 1788 … The mess mates drew something, three prizes and a blank.  I was most lucky drew a filtering stone, Doctor the mustard pot, Faddy a rotten pumpkin, Capt Meredith the blank”