You are here: Home / Marines / John McCarty and Ann Beardsley

The story of First Fleet Marine John McCarty and partner Ann Beardsley (aka Beazley) is one that to this day conceals many unknowns. Whilst we now their general story and general dates of events, there are many specifics that remain unknown. Many have tried to detail their lives, much of this poorly researched and overstated. Some have claimed John McCarty to be some type of super-soldier, serving on special assignments well into his 80’s and being moved all over the colony as a type of trouble shooter. 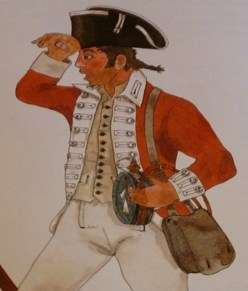 Whilst we’d all love our ancestor to be someone outstanding the truth is almost always far less exciting (but far more realistic) John McCarty was a simple Marine who only ever served at the rank of Private. He was part of the First Fleet to Botany Bay which is outstanding enough, and perhaps the most noteworthy thing about him is that he served in the early era at each of the four major new settlements in New South Wales – at Port Jackson as a Marine of Capt Campbell’s Company 1788-91, Norfolk Island as a Settler and soldier of the NSW Corps 1792-1808, at Hobart Town as a Soldier and later a settler 1808-1839, and finally in Port Phillip as a retired veteran Soldier 1839-1846. John McCarty’s year of birth is uncertain due to conflicts with several primary sources but is implied to be c.1758

Permission was given from the author Mr Glen Lambert to place his story on the website and to be uploaded by Cheryl Timbury.