Port Phillip Settlement Planned
Captain Collins in Charge
The home government has approved the proposal for a new settlement to be set up in the Port Phillip District. Captain David Collins who served as Judge Advocate under Governor Phillip and departed the Colony for Home in 1796, has been appointed to lead an expedition from England to found the Port Phillip Settlement.

His Excellency Governor King has urged settlement of Port Phillip since he received reports of Lieut. John Murray (HMS Lady Nelson) and Commander Matthew Flinders (HMS Investigator).  Both officers, having examined the extensive bay on the southernmost coastline of New South Wales, declared it a suitable site for this purpose.

The Governor decided to name the place Port Phillip in honour of his former commander, the founder of the first settlement at Sydney Cove.

Governor King is of the opinion that the establishment of the new settlement is made necessary by the activities of French explorers in these southern waters, carrying out what are termed scientific surveys of the New Holland coastline.  Possible foreign claims to these territories should be discouraged.

Lieut J Bowen to Risdon Cove
Dispatches from Lt John Bowen report that establishment of a settlement in Van Diemen’s Land proceeds satisfactorily.  Lieut Bowen has set up at Risdon Cove on the Derwent River (both places named by John Hayes, the English explorer who discovered them in 1792.  Nine soldiers, four free settlers, 35 convicts and a quantity of livestock comprises the little colony.

Lieut Bowen expects that a town will eventually rise there.  He names it Hobart in honour of Lord Hobart, Secretary of State for War and the Colonies, who authorised the establishment of the settlement following representations from Governor King.

His Excellency has for some time desired an alternative settlement to Norfolk Island, where difficulties arise in supply and maintenance of discipline.  The activities of the French in the vicinity of Van Dieman’s Land are another source of anxiety.  Gossip during Capt. Baudin’s stay in Sydney let Col. Paterson to report that the French intend to lay claim to our southern island.

Though Captain Baudin’s frank demeanor made it difficult to believe such rumours His Excellency sent Lieut Robbins, in capacity of messenger, to remind Capt Baudin, then encamped on King Island, that Van Diemen’s land is a British possession.  The French explorer replied with assurances that such a reminder was unnecessary. It was here at Sorrento on the 9 October 1803, the Lieut Governor David Collins first landed.  Following the landing he established a camp consisting of 299 convicts, some wives and children, some free settlers, 50 Royal Marines, a chaplain and civil officers, totalling in all about 460 people who had left England in April 1803 on board HMS Calcutta and the Ocean transport.  Collins named it Sullivan Bay after the Undersecretary for War and Colonies, John Sullivan.

The original settlement was abandoned after seven months, before the settlers moved on to establish Hobart. The day began on Sorrento Pier when a colourful crew was delivered by the replica vessel Lady Nelson.  Mainly First Fleet descendants, who have family links to the first settlers, had travelled over the bay from Sorrento in period costumes. Participants in the re-enactment were rowed ashore off Lady Nelson by the Sorrento Sea Scouts whilst the others joined in with scouts, dignities, visitors and friends to wait their arrival at Sullivan Bay. The Union Jack was raised, a toast drunk to King George 111, and the equivalent of a 21 gun salute by sailors from HMAS Cerberus followed.  A roll call of descendants of Victoria’s pioneers was read out, and then everyone joined in singing the Fellowship’s theme song ‘Botany Bay’.

The program concluded with a service of thanksgiving by the Rev George Charles. 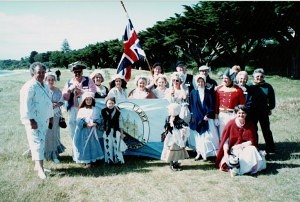 The re-enactment of the Proclamation and punishment, 17 November 1803, was held on the Sorrento foreshore.  The performers were the Sorrento and Mornington Sea Scouts, Southern Peninsula Players and First Fleet members, many with descendants off the Calcutta and Ocean. During the afternoon the official speeches were held, a Colonial picnic and the sail past by HMS Lady Nelson, Couta boats and other craft. And how the settlement celebrated, as thousands flocked to Sorrento to witness the re-enactment of the European’s first landing on Victorian shores.  Members of the Fellowship, all direct descendants of the First Fleet landing, played Collins and the rest of the official roles.  Stunning weather was matched by the excitement of hundreds of people dressed in period costume both for the Commemoration Street Parade and in the landing re-enactment ceremony on the foreshore. Replicas of the HMS Lady Nelson and the Schooner Enterprize were in the bay for sailings and the re-enactment, this being the main day of a week of celebrations. To Reverend Knopwood
It is my honour to invite you and your family to sail over to the unknown Port Phillip Region (part of the New South Wales Colony).  We will be sailing on the well known supply ship, the Ocean.  It is said to be that we will be carrying 18 men, 10 women and 21 children.  We will be sailing with the Calcutta carrying 299 convicts, their wives and children, 50 Royal marines and myself, Lieutenant Governor David Collins.  Your duties will be christenings, baptisms, weddings and church services for the folk of the settlement.  So I really do hope you can join us on this one in a lifetime opportunity.
Yours sincerely
Lt Governor David Collins

Composed by a student at the Sorrento Primary School for the Ecumenical Church Service, held St Mary’s Star of the Sea 12 October 2003. To commemorate Victoria’s first European settlement, a monument listing the names of the 460 approximate settlers, was unveiled by the Mayor of Morning Peninsula Shire, Cr David Renouf on Thursday 9 October 2003 at the Collins Settlement Site, Pt Nepean Road Sorrento.