was sentenced to transportation for 7 years on 5 or 6 July 1785 at the Berkshire, Summer Assizes.  Tried as Thomas Heddington (sic) late of the parish of Bray in the county of Berkshire Labourer on the 23rd day of March, with force and arms in the parish aforesaid, 2 silver Tablespoons of the value of 12s.  One Wooden Dish of the value of one penny four copper farthings of the value of one penny 20 copper halfpence of the value of 10d and six pounds in monies numbered of the goods and monies of Isaac Sewell, feloniously did steal and carry away.  Age given as 18, Thomas spent time on the Ceres hulk before being delivered to Alexander on 6 January 1787.  On 4 March 1790 Thomas was sent to Norfolk Island by Sirius and there in July 1791 was supporting three on a Sydney Town one acre lot.  Up until his death on the Island on 13 January 1798 Thomas had leased a further 12 acres of which were under cultivation.  His tombstone is the earliest legible one that has survived on the Island pre 1800.  Thomas was survived by his wife Elizabeth Thompson (Lady Juliana) and children Adam, Margaret and John.  On 30 December 1806 Elizabeth Eddington was credited with £16.5d for the sale of sheep before leaving for VDL (Tasmania) with Margaret 15, and John 13.  Elizabeth died in Hobart Tasmania on 10 April 1839 aged 92 and was buried as Mrs Eddington. 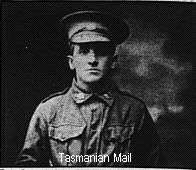 The Mercury (Hobart Tasmania) Friday 11 May 1917, page 5
News has been received of the death of Osmond Field (Bob) Eddington, killed in action in France on April 15.  He was the youngest son of Mr T.H. Eddington of Church Street and grandson of the late Mr John Eddington, Past Grand Master of the Masonic Lodge, also great-grandson of the late Judge Hibbins.  Although a young man he had travelled much, and been in several shipwrecks.  After one wreck he was in the water for more than five hours, eventually being brought to shore by a Negro, who had held him up the whole time.  He was also in the great earthquake of San Francisco in 1906, and saved life there.  Among other acts, he rode for some miles with a mother and her few hours’ old infant through the fires, after he was sworn in as a special constable to guard the Mint. 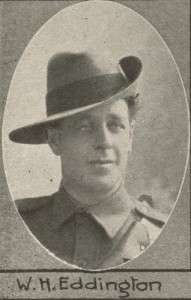