Nathaniel Lucas
was sentenced at the Old Bailey on 7 July 1784 to transportation for seven years for theft of a few items of clothing.  Said to be a carpenter and joiner, he spent time in the Ceres and Censor hulks before being sent to Scarborough on 27 February 1787.  On 14 February 1788 after the Fleet’s arrival, Lucas was sent to Norfolk Island with the group to settle the island, and making himself a valuable assert as a carpenter in the new community.  Amongst the group sent to Norfolk Island was:

Olivia Gascoigne
who had been indicted when sentenced to death at Worcester on 5 March 1785 for theft from a dwelling house of coins totalling £3.17.6d.  She was reprieved to seven years transportation on 28 December and held in Worcester gaol until ordered to Southwark gaol.  From Southwark she went with the group of women who embarked on Lady Penrhyn on 31 January 1787.

By the time of their arrival on Norfolk Island, Olivia and Nathaniel lived together.  She bore him children annually to a total of 13, eleven of whom survived infancy.  On 31 December 1792 Nathaniel was appointed superintendent of convict carpenters, blacksmiths and sawyers, and settled on 15 acres and was selling grain to stories.  The family returned to Port Jackson in 1805 and in February 1806 Nathaniel had erected an octagonal smock mill on the esplanade at Fort Phillip, two pairs of millstones to come from Norfolk Island.  After a period as a private builder, Nathaniel became superintendent of carpenters in NSW.  Many of his buildings are well known today.  On 5 May 1818 his body was found in the river mud at Liverpool, his death believed to be suicide from mental derangement, due to constant drinking.

Following Nathaniel’s death, Olivia went to VDL in 1818 with six of her surviving children and settled on 100 acres at Port Dalrymple.  She was buried there on 12 June 1830, her age given as 69. 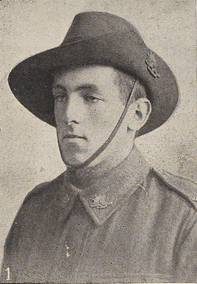 Panel 64 in the Commemorative Area at the Australian War Memorial

2636 Charles Jamieson Hodgetts (Brother Harold James Hodgetts)
Private 57th Battalion
Born 11 April 1896 Emu Bay Tasmania to Alman Albert and Jane Elizabeth (Davis) Hodgetts
Occupation Mill hand
Enlisted 6 May 1916 Melbourne Victoria, aged 19 years
Next of kin father Mr AA Hodgetts Yarra Junction and 25 Chestnut Street Carnegie Victoria
Embarked 18 September 1916 Melbourne Victoria aboard HMATS Karroo
Service in France
Killed in action 29 September 1918
I saw him killed by a Machine Gun bullet at Bullecourt.  He was taken out and buried but I cannot say where. I knew him and was at school with him.  He came from Yarra Junction.  He was in the same Platoon as me.
Sergt. REF Atkins 3277, 57th Australians A.4
I knew Casualty.  He was a well built man, 5’10”, dark complexion about 26 years of age.  Casualty was in the Front Line at Bullecourt.  He was going from the trench to position on the Railway line, when a M.G. bullet penetrated his chest killing him instantly.  I was a few yards away from him at the time of his death.  I carried him into a Shell Hole and he was left there until next day when he was buried.  A cross with his Name, Number and Unit on it was erected over his grave.
Informant: 3409 Hefford Pte, 57 Btn.
(Australian Red Cross Society Wounded and Missing Bureau files 1914-1918 War)
Buried 25 January 1919 Bellicourt British Cemetery 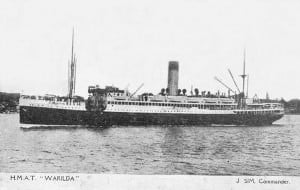 Service in France
Killed in Action 29 July 1916 Pozieres France
Previously reported missing
Informant states that on the night of July 29th 1916 at Pozieres they made an attacked but failed and were driven back and as they returned he saw Pte J Hodges lying dead in the ridge of the trench.
Informant – Pte J Smith 3696, 26th AIF C Coy
WA Wood No. I Platoon, A Coy, 26th Australians saw Hodges standing on the top of the parapet at Pozieres.  He was saying the Germans could not hit him when instantly a sniper caught him and killed him outright
(Australian Red Cross Society Wounded and Missing Files)
Honoured Villers-Bretonneux Memorial, Villers-Bretonneux, Picardie, France Cecil Rodwell Lucas MID
Major 56th and 53rd Australian Battalions, 14th Infantry Brigade
Born 4 June 1887 Ashfield New South Wales to Edgar and Catherine (Rodwell) Lucas
Education at Sydney Grammar School
Occupation Barrister-in-law, Judge’s Associate
Appointment 5 May 1915 aged 27
Next of kin father Edgar Lucas, 21 Giersbone Street Waverley New South Wales
Embarked 12 May 1915 Sydney New South Wales aboard HMAT Themestocles A32
Appointed Lieutenant 5 May 1915
Promoted Temporary Captain 8 October 1915
Promoted Captain 1 April 1916
Promoted Major 1 April 1917
Service in Gallipoli, Suez Canal Defences and Sinai Peninsula, Egypt and France
Mention in Sir Douglas Hague Despatch 9 April 1917
This Officer has served in Gallipoli, Egypt and France, and cannot be praised too highly for the way in which he has carried out his duties.  During the period the Battalion was in the Fleurbaix Sector, Captain Lucas took charge of the raiding party from the Battalion.  He was responsible for the organisation of the party and also for the preliminary training in the art of raiding.  By Captain Lucas’ training and fine leadership, he was able to inspire a feeling of confidence throughout all ranks of the party and was thus largely instrumental towards the success of both raids.  Since the Battalion has been in the Somme area this Officer’s work has been extremely satisfactory.  On more than one occasion he has been in command of the Battalion, carrying out his duties very satisfactorily indeed.
London Gazette 1 June 1917
Commonwealth of Australia Gazette 4 October 1917
Returned to Australia 23 June 1919 on HT Orita
Appointment terminated at Sydney New South Wales 8 October 1919
Died Concord New South Wales 3 April 1962 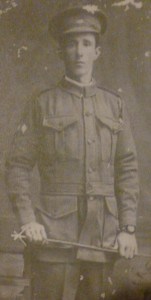 1042 Charles Fenton Robinson MM
Driver 43rd Australian Field Artillery Battery
Born 1896 Warrnambool Victoria to Joseph and Ellen Olivia (Davies) Robinson
Occupation Labourer
Enlisted 24 September 1914 Melbourne Victoria aged 18 with consent of parents
Embarked 22 December 1914 Melbourne Victoria aboard HMAT Ulysses A38
Service Gallipoli Peninsula and France
Awarded the Military Medal 31 October 1917, for conspicuous gallantry and devotion to duty.  On October 20th when carrying rations to his Battery position at TOKIO (East of Ypres), a heavy barrage was put down by the enemy.  One of his horses being wounded by a shell, Driver C.F. Robinson distributed his load between himself and the remaining horse, and in spite of the continued heavy shell fire and his horse being repeatedly bogged, he stuck to his work until he succeeded in delivering the rations to the Battery.  Similar gallant and timely service has been repeatedly rendered by this Driver throughout the period from 10th September to 28th October 1917.
London Gazette 4 February 1918
Commonwealth of Australia Gazette 27 June 1918
Returned to Australia, disembarking 1 December 1918 Sydney New South Wales
Discharged 31 January 1919
Died 24 July 1939 Prahran Victoria