On meeting Matthew Everingham
During one of Aunty Eunice’s who is related to who talks I discovered I am a direct descendant of a First Fleet convict, Matthew Everingham.  To a young teenager’s ears, this was most intriguing.  The family story was that Matthew had not returned two books to their rightful owner and there was a hint of forgery somewhere!

In 1980, the book Matthew Everingham: A First Fleeter and His Times was written by Valerie Ross – another Everingham descendant and Australian historian was published.  Her research revealed that Matthew was 14 or 15 at the time of his trial in 1784.  He was recently unemployed, sick and had fallen behind with his rent, which the landlady was demanding.  So he obtained two law books from the clerk of an attorney, Samuel Shephard, who was to play a significant role in this story for the next few years.

Matthew sold the books to a bookseller for the total value of ten shillings.  A letter of authority was required, which Matthew wrote as he had been previously employed as an attorney’s copy-clerk.  But suspicions led to his eventual trial at which Samuel Shephard was the prosecutor.  Matthew’s defence was I was in great distress.  He was found guilty and sentenced to seven years transportation to America, even though that country was no longer a receptacle for Britain’s convicts since the successful American War of Independence. 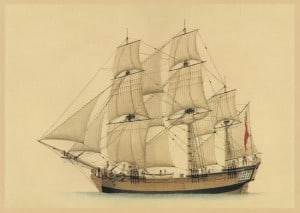 So Matthew was incarcerated in the hulk Censor on the River Thames.  Samuel Shephard was apparently dismayed by the severity of the sentence and we shall see the outcome of this later.  When the First Fleet sailed from Portsmouth on 13 May 1787, Matthew was on board the Scarborough – one of 208 male convicts.  He was 19 when the Fleet landed in Sydney Cove.

In June 1790, the Second Fleet arrived.  On board the notorious Neptune was Elizabeth Rimes, who was convicted at 15 or 16 to seven years transportation for stealing a sheet and blanket, value seven shillings.  Matthew describes Elizabeth as a most excellent woman in The Everingham Letterbook.*  He married her in 1791 and three months later his sentence expired.  He was granted 50 acres on land to farm at the Ponds, Parramatta.  Tragedy occurred when their first baby, Mary, died at the age of one month.  Over the succeeding years, nine healthy babies arrived.  I am descended from William, born 1797.

During the next twelve years, Matthew cultivated 17 acres in wheat and maize.  He described the land as steril so we can imagine the hardship involved.  But an exciting episode occurred in 1795 when Matthew with two other First Fleeters, William Ried/Reed and John Ramsay (seaman) nearly succeeded in crossing the Blue Mountains.**

After six days of trekking and climbing an unknown route, they were forced to turn back because of dangerously low provisions.  The expedition lasted a total of thirteen days, the last three without provisions and Matthew without shoes which to me was much worse than the loss of victuals.***  This courageous attempt occurred eighteen years before the successful crossing of Lawson, Blaxland and Wentworth.

Governor King moved Matthew to more prosperous farming land at Portland on the Hawkesbury in 1802.  In May 1804, the Sydney Gazette reported that Matthew, Elizabeth and their Irish servant had been speared by natives and their home and barn burnt.  In spite of assistance from neighbours, it was a bad set-back for the family.  There were later moves to Green Hills (Windsor) and West Hill.  There were some good years, but debts mounted because of crop losses due to drought, flood and bushfire.  The family moved back to Portland Head in 1817 and rented a property near their original farming land (which now belongs to the Sackville Ski Gardens).

About this time, Matthew was appointed District Constable at Portland Head.  He had already been described as an industrious settler in the Governor’s Return of Land 1800-1803.

On Christmas Day 1817, Matthew was summoned to investigate illicit run selling on a boat in the Hawkesbury.  During proceedings, he fell overboard and was drowned.  He was 48 at the time of his death.

Elizabeth stayed on at the farm – it was granted to her in 1838; she later sold it to a son, George, and it is known as the Elizabeth Everingham Farm.  In 1827, when she was 53, she married an Irish convict, Patrick McGahy, aged 25.  He was partly literate.  Elizabeth died in 1841.

Matthew and Elizabeth had 85 grandchildren and so the family keeps growing – abundantly!  Their youngest son, John lived with an aboriginal woman so there are also descendants from this union.

Regardless of how we fudge events concerning Matthew in 1784, his continuing story shows resolve, determination, initiative, courage and a responsible attitude towards his community.  He was only 19 when he arrived as a convict to this unknown and frequently hostile country, but he became a respected pioneer.  I am proud to number myself amongst his many great-great-grand daughters.

*The Everingham Letterbook edited by Valerie Ross and published in 1985, contains copies of three letters Matthew wrote to Samuel Shephard in 1789, 1792 and 1796.  Shephard wrote to Matthew when he was on the Censor as Matthew refers to this correspondence in the 1789 letter.  The original letterbook was discovered in 1964 among station records at Blackwood, a pastoral property in the Western District of Victoria and sent to the Archives Department, Melbourne University.

**The Everingham Letterbook pp.50-57.  Matthew’s personal account of the attempt.  Appendix 5 pp. 113-158 examines the attempt in detail.  The book contains a unique insight into life during those early years.

At Rosehill (Parramatta)
By permission of Arthur Phillip, Governor
(These words are written on top of the first page of a collection of fragmentary leaf documents, with ragged edges, bound together there in a book at St John’s Church, (Parramatta)
The solemnization of matrimony by (Banns) sic between Matthew James Everingham and Elizabeth Rhymes and married this 13th day of March in the year of Our Lord, one thousand seven hundred and ninety-one (1791)
By me, Richard Johnson, Chaplain
This marriage was solemnized between us
(Matthew Everingham
( Elizabeth Rhymnes
)
In the presence of       )         Thomas Barsby
)          Peter Stewart
Witnesses

A remarkable thing about the Everingham’s marriage was the fact that the attestation was made by two witnesses – Barnsby and Stewart – both of whom were males.  Normally it was male and female witnesses to such attestations.

Both parties to the contract signed their names in a good firm hand; so vastly different to most of the First Fleet marriages.  In the baptism entries made by the First Chaplain the Reverend Richard Johnson, in the same valuable book, there is one commemorating the baptism at Parramatta of a daughter named Mary Everingham, born 23rd December 1791.  The parents were Mr M J Everingham and Mrs Elizabeth Everingham (nee Rhymes).  In womanhood this baby daughter became the founders mother of the very old Hawkesbury family, the Woodburys.

Following the untimely death of Matthew by drowning, he was buried in the little church yard near St John’s Church, Wilberforce.  The inscription on his head stone reads:

Sacred to the memory of Matthew James Everingham
who departed this life
25th December 1817, aged 47 years.
Farewell, vain world: I have had enough of thee, and I am careless what you can say of me.  Thy smiles I cort (sic) not, nor thy frowns I fear:
beneath this turf my head lies quiet hear (sic) In Tench’s History he relates that on a visit to the Ponds (North Parramatta), he found amongst the settlers Matthew Everingham, an attorney’s clerk, of whom he writes: The attorney’s clerk I also thought out of his province; I dare believe that he finds cultivating his own land not half so easy a task as he formerly found that of stringing together volumes of tautology to encumber or convey away that of his neighbour.