(alias Ester Eccles) was 17 years of age when she was tried at the Preston Quarter Sessions in January 1787, and found guilty, for having stolen a scarlet woollen cloak, a blue stuffed quilted petticoat and a black silk hat. Many years later Ellen’s daughter Mary Ann claims that her mother said very little about the Old Country, however she felt that her mother did not steal the goods at all, she felt that Mr Standen gave her mother the articles, but when the return on his investment was not what he expected he cried thief.   Following her trial and sentence of seven years transportation, she was brought to Portsmouth by the turnkey of Lancaster gaol and embarked on Prince of Wales.

At Port Jackson, on 24 May 1789, a daughter Mary Anne, by James Wilson was baptised.  With the child she was sent to Norfolk Island by Sirius on 4 March 1790.  Two years later Mary Anne died.

Ellen stayed on Norfolk Island, except for a brief return visit to Sydney Cove, and had five more children.  In 1808 with Thomas Guy, whom she later married in Hobart in 1812, and three of the children, sailed to Van Diemen’s Land (Tasmania) by City of Edinburgh. Ellen alias Esther Guy, age given as 72, died at Black River, New Norfolk Tasmania on 12 November 1839 from natural causes.

Mentioned in Despatches This NCO was in charge of a strong post in Merret Wood on 31/3/18 and whilst so placed, his conduct and example to his men during heavy enemy shelling calls for special mention. Sgt Bilston has on all occasions in the past, both in and out of the line, shown constantly good work. 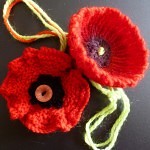 Cheryl’s poppies for the 5000 poppies project

Francis Hope Lascelles
Lieutenant King’s Royal Rifle Corps, 14th Battalion of the 60th Rifles, 42nd Brigade
Born 19 October 1891 at Recluse Newtown Geelong to Edward Harewood and
Ethel (Dennys) Lascelles
Attended Geelong Grammar School. Active in sport
Gained experience in the wool industry in Bradford, England, and later joined the staff of Dennys Lascelles Ltd, Geelong Victoria
Left Melbourne for England in 1915
Gained a commission in the British Army King’s Royal Rifle Corps at Belbus Park, Purfleet, England
Put in charge of a machine gun section
Killed in Action 22 August 1917 at Zillebeke, Flanders, during the third Battle of Ypres Honoured on the Tyne Cot Memorial to the Missing at Zonnebeke in Belgium
Panel 154 to 159 and 163A