John Anderson, a former seaman, was committed to gaol at Exeter Devon, on 24 July 1785 for breaking into a house and stealing a linen handkerchief, other goods and money.  Sentenced to seven years transportation, he spent time in the Dunkirk hulk before embarkation aboard the Charlotte.  At Sydney Cove he married Elizabeth Bruce on 16 March 1788, signing with a mark.  On 4 October, both were sent to Norfolk Island on the Golden Grove.  On the Island he was employed to help John Altree and Thomas Webb at Ball’s Bay, and he also became a member of the night watch at Grenville Vale.  At the end of 1792 he was selling his own grain to government and by mid-1793 was settled on twelve acres, all ploughable and cultivated.  John Anderson disappears from records after 1796, either having died or deserted his family.

Elizabeth Bruce, was tried at the Old Bailey on 10 January 1787 for theft of three linen tablecloths and two aprons.  Found guilty and sentenced to transportation for seven years, Elizabeth arrived in Sydney Cove aboard Lady Penrhyn.  During the voyage Elizabeth had a fall from the forecastle and broke her right leg at the ankle.  On 4 October 1788 she left Sydney Cove as the wife of John Anderson for Norfolk Island.  Through-out the following years she is recorded as having three sons and living with John Anderson, settler.  After John Anderson’s disappearance, Elizabeth began living with Francis Flexmore (Neptune 1790). 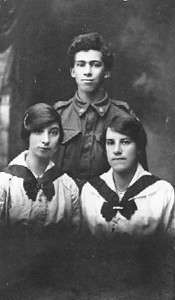 Elizabeth Bruce
Went to Van Diemen’s Land (Tasmania) by City of Edinburgh on 3 September 1808 as the wife of Francis Flexmore, and her five children all born on Norfolk Island, three by John Anderson and two by Francis Flexmore.  In 1813 Flexmore had grants at Crayfish Point and 50 acres at Sandy Bay.  Other lands were acquired and purchased at Green Ponds (Kempton), where they lived till both died.  Francis Flexmore died on 21 May 1835 at Kempton followed shortly after by Elizabeth Bruce Anderson Flexmore on 14 June 1835 at Kempton.  Both were buried in the grave yard of St Mary’s Church, Kempton Tasmania. 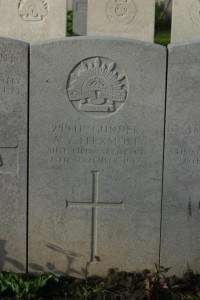 The Mercury (Hobart Tasmania) Friday 18 September 1918
In Memoriam – Died on Active Service
FLEXMORE – In loving memory of Gunner Archie Flexmore, who died of wounds, somewhere in France, September 18, 1917.  He was one of the best.  “Until the last day breaks and the shadows flee away”.