Edward Garth was indicted for feloniously stealing on the 29 October 1784, two live cows, being the property of Thomas Rhodes the younger.  He was reprieved on 3 March 1785 to transportation to Africa for seven years.  Following time spent in the prison hulk he was sent to Portsmouth for embarkation on Scarborough. Immediately on arrival at Port Jackson, Edward was selected to go with the first group to settle Norfolk Island, which included six female and eight male convicts.  One of the female convicts being

Susannah Gough was indicted for feloniously stealing, on the 19 August 1783, nine guineas, value 91. 9s. and one half-guinea, value 10s. 6d. the monies of William Waterhouse, privily from his person.  Found Guilty for stealing, but not privily.  Sentenced to seven years transportation.  Arrived Sydney Cove aboard Friendship.

At Norfolk Island in 1795, Susannah married Edward Garth and over the following years children were born to them.  With husband and six children, they left Norfolk Island on 26 December 1807 for VDL (Tasmania) by Porpoise and lived on lands at Clarence Plains and Queensborough.  Edward died on 13 December 1823, aged 55.  Susannah died on 24 June 1841 at Hobart, age given as 78. 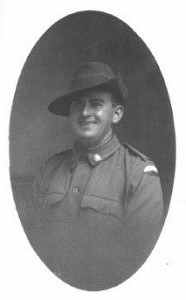 My memories of my Grandfather are very few as I was only seven years old when he passed away in 1948.  As a child I always thought he was a big man, however he was only 5’7” tall and weighed about 156 lbs.  He wore a top hat and when he visited Mum and Dad’s Berry farm at Oyster Cove, Tasmania he had lollies in his pockets.

My only other true memory is of the day he passed away.  My father had received advice of Grandfather’s death from Bob Heddle at the Electrona Carbide Works and he had come home to tell Mum.  A few minutes later a small bird flew into the kitchen of the old farm house.  It may have been a messenger or a distraction!  Some stories carry messages.

The gentleman who discovered Grandfather after his demise in 1948 (Bob Heddle) was later to become the father-in-law of my youngest brother Michael when he married Bob’s daughter Correylyn Heddle in 1975.

Amiens and the Somme April 2015

By Gemma 16 and Eliza 13, descendants from Edward Garth, Susanna Gough and Arthur Lewis Williams, who were travelling with their parents to the battle fields of France.

We caught the train from Gar de Nord to Amiens and met with our tour guide.  Our first stop was the Commonwealth War Memorial where many of the graves of Australian, British, Canadian and other Commonwealth countries are.  There was a big memorial wall for all of those missing.  It was so quiet and peaceful and the grounds were so well kept with flowers and manicured lawns.

We then headed to Villers Bretonneux and the Victoria School, so called as money from families in Australia was raised to rebuild the school after the war.  The assembly hall is currently housing a museum dedicated to the Australian involvement in the area.  The wood in the school comes from Daylesford.  This was town important because on the 25th April 1918 the German advance was stopped here.

We then went to Heath cemetery where Mum’s great uncle Len (Arthur Leonard Steel) was buried.  We worked out he had lied about his age to go to the war.  He was killed in action while standing at the entrance to a bunker near Fraemerville – Rainecourt.  He was killed instantly and the others in his party were buried but survived.

We found his grave and placed an Australian flag and some of our travelling koalas on it.

It was emotional being there and knowing his story.  It was sad to think that we were probably the first relatives to visit.