Ann was born at Abberley, in 1754, the youngest of four children of Samuel and Mary Inett. As a young woman, she made her living from dress-making and had two illegitimate children – Thomas, in 1778, when she was aged 24, and Constance, in 1781, when she was 27. Both were christened at Bayton Church, near Rock.

At the age of 31, she was, for some unknown reason, driven into crime. Berrow’s Worcester Journal of 14 July, 1785, first reported: The dwelling-house of Susannah Brookes in Grimley has been broken open and several articles of her wearing apparel taken thereout.

In the following week’s Berrow’s Journal was able to report that Ann Inett, late of the Parish of Grimley had been apprehended for the crime and taken into custody.

However, she was to remain in prison for more than seven months until making her appearance in the dock at the Worcester Assizes in the Guildhall on 11 March, 1786.

She was led up from the Guildhall’s basement cells to face the charge that she did with force and arms, break and enter the house of Susannah Brookes and steal a petticoat, two aprons, a pair of shoes, three muslin handkerchiefs, a silk hood, a gauze cap, a linen gown, cotton stockings, and a muslin cap, all to the value of 21 shillings.

It was a capital crime carrying the death penalty, so there could be no surprise when the judge sentenced Ann to be executed.  Exactly a month later, Ann escaped the rope when she was reprieved and had her sentence commuted to seven years transportation beyond the seas.

Ann was kept in prison for months, but eventually taken by waggon to Gravesend, Kent, to embark on the Lady Penrhyn, a 338-ton ship specifically designed to carry female convicts to Botany Bay, as part of the First Fleet.

However, she and 100 other women prisoners were to remain on board the ship in harbour at London, and Portsmouth, for another four months until the Lady Penrhyn eventually sailed on 13 May, 1787 – almost two years after Ann’s original arrest and more than a year after her trial at Worcester Guildhall.

Ann had to leave behind in Worcestershire her two illegitimate children, Thomas, then nine, and Constance, six, but who looked after them and brought them up is not known.

Her occupation on embarkation was recorded as dressmaker and her age as 30.  The very moment she set foot on Australian soil in February 1788, her fortunes began to change dramatically.

Because her behaviour had been the least exceptional during the voyage, she was selected to continue on from Botany Bay to Norfolk Island in the Pacific, 1,000 miles north-east of Sydney, to become housekeeper to 30-year-old Lieutenant Philip Gidley King RN the Lieutenant-Governor of the island colony.

Ann was described as an attractive woman, small framed, dark haired and with a neat and clean appearance.  She accepted Gidley King’s offer to be his housekeeper and, according to records, proved to be an industrious and accommodating woman, keeping all the public quarters clean and tidy as well as cooking Gidley King’s food, keeping his home comfortable, and warming his bed at night.  As his mistress, Ann was to bear the Lieutenant-Governor two illegitimate sons – Norfolk King, born at Norfolk Island on January 8, 1789, and Sydney, born in Sydney, in July 1790. 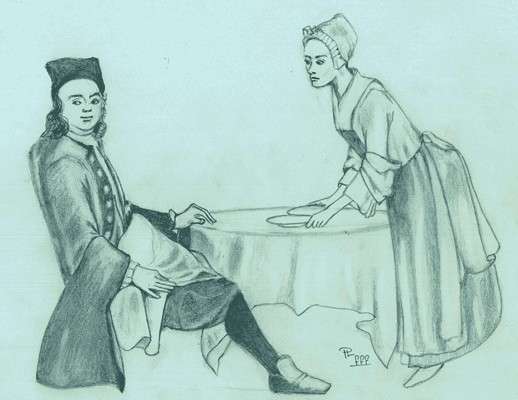 That same year, however, Gidley King returned to England, leaving Ann in Sydney to continue serving her sentence and to look after her two illegitimate babies.

When King returned to Australia he arranged for his sons to be sent to England to be educated, and both went on to become distinguished Royal Navy officers.

In November 1792, Ann was married at Sydney, to Richard John Robinson, another convict transported from England, having originally been sentenced to death at the Old Bailey for stealing a bay gelding.

Ann and her husband opened a hotel, the Yorkshire Grey and, a few years later, with her transportation sentence complete, Ann was granted 30 acres of land known as Pleasant Farm at Sydney Cove and also a large site at Pitts Row, Sydney – favours apparently bestowed on her by the newly-appointed Governor of New South Wales.

The couple were also given another 100 acres of land as reward for working hard and leading a clean life and thus became prosperous business and property owners in the fast-blossoming Australian city, employing servants and also farm workers to look after their substantial acreage and stock.

Permission was granted from the Descendants of Convicts Group Inc. to reprint the story on Ann Inett that appeared in their Newsletter – The Mail, No. 191 July/August 2019