Lady Penrhyn, a three-masted wooden cargo vessel of 338 tons, was built in 1786 on the River Thames, by Edward Greaves of Limehouse London for Curtis & Co., London.  She had a length of 103 9/10 feet and a beam of 27 5/10 feet, with a round house and quarter badges, with a woman figure-head.

The ship’s name was given in honour of Lady Ann Susannah, wife of Richard Pennant who was a Liverpool merchant prince who founded his fortune on the slave trade and inherited estates in Jamaica. On 6 December 1765 he married Ann Susannah, daughter and heiress of General Hugh Warburton (1695-1771) who held part of the moiety of the Penrhyn estate.  In 1783, Richard Pennant was raised to the peerage of the Kingdom of Ireland as Baron Penrhyn of Penrhyn in the County of Louth.  Baron Penrhyn was also heavily involved in slate producing concerns in north Wales.

It is more than possible that Lord Penrhyn (Richard Pennant) was a friend of the part owner of Lady Penrhyn, Alderman (later Sir) William Curtis, lord mayor of London and third generation owner of a sea-biscuit business at Wapping, London.

In 1786 Lady Penrhyn was charted by the Navy Board as a First Fleet vessel; her Master for the voyage to Botany Bay was the other part owner of the ship William Cropton Sever, master mariner and captain.  The Chief mate was Nicholas Anstis who later became the master of Surprise of the Second Fleet.

William Richards jnr and friend to William Curtis, was a prominent Walworth shipbroker, who acted as agent for the owners and master.  The transports were charted at a rate of ten shillings per register ton per month.  Once discharged from government duties in NSW, Lady Penrhyn was under contract to the East India Company to sail to China for a cargo of tea for the London market.

Lady Penrhyn had no sea time before being fitted out in Deptford for her run to Botany Bay.  Described as the other lady to Charlotte, Lady Penrhyn had on board the largest number of female convicts; of the 101 women there was a large contingent from London.  In charge was 1 captain, 2 lieutenants, 2 sergeants, 3 corporals, 1 drummer and 35 privates, with a person acting as surgeon’s mate, John Turnpenny Altree, who proved unequal to the task, and was superseded at Teneriffe by the ship’s surgeon Arthur Bowes.  The female convicts were delivered by wagon beginning in early January 1787 from Newgate, and Southwark jail and country prisons to the ship at Gravesend; some accompanied by children like Mary Harrison and son Joseph. When at anchor, one woman convict died, after a fever broke out aboard the ship.

The ships of the fleet assembled at Spithead Portsmouth on 17 March 1787 and were joined on the 12March by HMS Hyaena, the escort ship.  At daybreak the following morning the fleet set sail and once clear of the English Channel, HMS Hyaena left them. 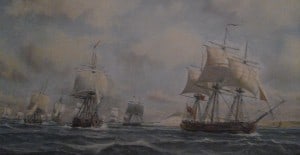 The Fleet and escort leaves the Needles

The Voyage
Lady Penrhyn had difficulty in her sailing abilities, often lagging behind the other ships.  The woman convicts caused numerous problems on the voyage and were punished for thieving, fighting and abusive language.  There was an exchange of three seamen between HMS Sirius and Lady Penrhyn.  The men from the latter ship had been found guilty of mutiny and refusing to steer the vessel as directed by the master. From Cape Town, the Lady Penrhyn carried the first horses to come to Australia.  Bowes Smyth said This day we recd. on board 1 Stallion, 3 Mares & 3 Colts for Governor Phillips use at New South Wales.  The Cape of Good Hope Horse was largely descended from the Barb and Spanish Horse.

Cape Town to Botany Bay was the longest leg of the voyage, taking sixty-eight days. On 20 January 1788 as all the ships entered the Botany Bay harbour and, as they passed, Lieutenant Clark hailed the Prince of Wales and Charlotte and ask the lads on board how they did; answered all well.  He also hailed the Lady Penrhyn and found them there well.

Sydney Cove
David Collins: The Scarborough, Charlotte and Lady Penrhyn transports being cleared, were discharged from government service in the latter end of the month, and the masters left at liberty to proceed on their respective voyages pursuant to the directions of their owners.

Outward Voyage
Charlotte and Scarborough, after calling in at Lord Howe Island for supplies, sailed on with the intention of stopping at Norfolk Island to cut wood for ship’s spars.  Because of bad weather, they passed the Island and continued on into the Central Pacific.  Lady Penrhyn also called in at Lord Howe Island and there bid farewell to Captains Gilbert and Marshall.  It was after leaving the Island that Lady Penrhyn’s officers found she had been charted by Alderman George McKenzie Macaulay to go to Nookta Sound on the west coast of North America to collect a cargo of furs.  On board was Lieutenant John Watts, who had sailed on the Resolution with Captain James Cook and had connections with Macaulay.  Watts who had taken command of the ship in May, sailed the Lady Penrhyn to Tahiti instead, when the crew became stricken with scurvy, arriving in Matavai Bay by June-July, 1788. (Captain Cook had observed the transit of Venus in Matavai Bay in 1769).

Leaving Tahiti Lady Penrhyn continued north, coming across the most remote and largest atoll of the 15 Cook Islands in the south Pacific Ocean on 8 August 1788.  Called Tongareva, Mangarongaro, Hararanga and Te-Pitaka, the most commonly used name in English is Penrhyn, named after the ship by Captain William Sever.

The voyage from Canton via Tinian to refresh, took Lady Penrhyn around four to six months before reaching England in mid August 1789; she had logged 45,000 nautical miles since leaving England.   While at Tinian the crew found the bouy and anchor that Charlotte discarded when she left the Island in a hurry owing to heavy squalls.

When Lady Penrhyn finally arrived in Wampoa (Canton) China in late October to fill its cargo of tea commitment, it was to find Scarborough already moored at the dock.  Captain Marshall dined with his friend Captain Sever the day after the ship’s arrival.  Leaving the Lady Penrhyn Lieutenant Watts continued his journey to England onboard the Scarborough.

Captain William Cropton Sever
As master of Lady Penrhyn with female convicts aboard, it was not long before Sever was in a relationship with Ann Green/Cowley who had embarked on the vessel with her child William, who died on the transport on 8th February.

During 1788 a child Letitia Green was officially registered to Ann Green and William Sivers (sic).  Sever had left the colony on Lady Penrhyn prior to the christening of Letitia Green on Sunday 9th November.  She was recorded as the daughter of ‘Captain’ William Twiss (sic) sailor, and Ann Green convict.   Letitia Green died aged 37 on 10 April 1827 at Windsor NSW having been married to a much older First Fleet convict Roger Twyfield.  Their only known child Roger died at five weeks in March 1810.

William Cropton Sever, Mariner was living at Paradise Row Rotherhithe (a residential district in inner southeast London) at the time of his death aged 55. 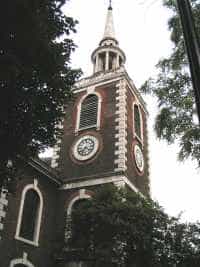 Burials in the Parish of Saint Mary Rotherhithe in the County of Surrey in the Year 1816. Entry No 1310 for William Cropton Sever

Fate of Lady Penrhyn
In late 1789 Lady Penrhyn was purchased by Wedderburn & Co London and used in regular London to Jamaica runs.  With several changes in ownership Lady Penrhyn disappeared from all records in 1811, after being captured in the West Indies and scuttled.