You are here: Home / Ships / Friendship 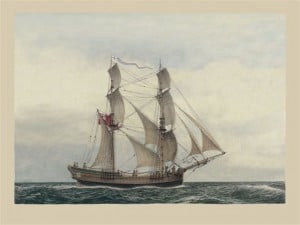 Friendship was a convict transport ship of 276 tons, which was built in Scarborough England, in 1784, for her owners Hoppers of Scarborough.  Aboard on the voyage to Botany Bay, were the Master, Captain Francis Walton, Assistant Surgeon Thomas Arnell and Marines, Captain James Meredith, Lieutenant Ralph Clark, and Lieutenant William.  As the smallest of the transports Friendship probably carried a crew of around 20. Her 76 male and 21 female convicts were loaded at Plymouth.  The voyage was not without incidents as Ralph Clark’s manuscript journal shows particularly with the convict women. After they were transferred to the Lady Penrhyn, Charlotte and Prince of Wales at the Cape of Good Hope for livestock and fodder, Clark wrote I am very glad of it, for they were a great trouble, much more than the men and he thought the sheep much more agreeable shipmates than the women.

On 5 July 1787, Captain Walton gave Ralph Clark a puppy that Clark called ‘Efford’ after the place where he became acquainted with his beloved wife Alicia.  An entry in his journal on 2 August: lost my ‘Efford’ overboard.  I am apt to think that he was thrown overboard by the first mate; if I was certain I would make some of the men give him a good thrashing.  I am sorry that I lost him poor dog for he begane to be fond of me.

‘Efford’ was not the only dog lost overboard, as Captain Meredith lost his dog ‘Shot’ on 30 September, making him the fifth dog that had been lost overboard since the Fleet left England.

Friendship entered Botany Bay on 19 January 1788 together with the other transports.  By the 26 January 1788 the fleet of 11 ships were anchored in Sydney Cove.

On Wednesday 30 January the Governor’s store of twenty-three sheep and five lambs, with other stock was landed from Fishburn and Friendship.

Outward Voyage
Friendship left Port Jackson on 14 July 1788 in company with Alexander. The Alexander’s log reads: At 11 am the Sirius’s launch left us: saw the other 3 transports: made the signal for them to close.  At noon, in company of the Prince of Wales, Borrowdale & Friendship.

Bradley recorded their departure.  The Alexander, Prince of Wales, Borrowdale & Friendship transports sailed for England under the direction & command of Lieut Shortland, Agent for Transports.  These ships were all in a distressed state when they sailed, both as to sickness, want of provisions & furniture.

Fate of the Friendship
Friendship and Alexander proceeded north.  Because of terrible losses due to survey, which delayed them reaching Batavia, there was insufficient crew to operate both ships, so Friendship was deliberately sunk (scuttled) on 28 October 1788 in the Straits of Makassar  (off the south-eastern corner of Borneo) on the order of Lieutenant John Shortland.  The survivors were transferred to Alexander for the remainder of the voyage back to England. Getting the sick ashore

What transpired after the owners, who wanted to charge the Government for the loss of the ship when they learnt of the scuttling of the Friendship, was a long legal battle that dragged on for several years.  Contactor William Richards did receive a reimbursement for his own losses by Friendship as written by him to the Navy Office in August 1791.

Captain Francis Walton
On the homeward voyage when Friendship was sunk, Walton completed the voyage in Alexander after protesting the scuttling of the vessel.  In 1794 Walton is found to be the Master of the 508 ton Loyalist hired by the transport board as a Victualler.  Married in 1793 to Kitty Cock at St Leonards Shoreditch London, he fathered seven children.  The London Directory of 1811 has him recorded as the London Dock Master, although the appointment possibly took place in 1804.

Francis Walton died aged 81, on 28 December 1839 at Pier Head, Wapping London.  He had a long and distinguished career.

The Friendship Medal
is an historical artefact of early Australian First Fleet history.  It is located in the National Maritime Museum Greenwich, London collection (Item No E4938-1/2).  Permission has been granted to reproduce their images of the Friendship Medal.   The Medal is made in silver in 1787 by an Unknown Artist.  The Overall measurements are 37 mm. It is not known whether Captain Francis Walton carried the Friendship Medal with him on the voyage to Botany Bay and his return to England.  Maybe it was a keep-sake given to him by his Mariner father Francis Walton prior to the First Fleet ships leaving Plymouth in 1787.  At the time of the First Fleet voyage, it was not uncommon for new ships and significant voyages to be commemorated with a special item bearing the words ‘success to the (name of the ship)’.