Mary Allen, sentenced on 25 October 1786 at the Old Bailey to transportation for seven years, was recorded as being one of the lowliest women to be transported.  Mary, thought to be a previous offender, was found guilty of theft of a watch and money, was sent to Newgate prison and was embarked on Lady Penrhyn on 6 January 1787, her age recorded as 22.

Mary’s first protector in this harsh new land of Sydney Cove, was Frederick Meredith, a seaman steward from Scarborough.  They had a daughter Charlotte, who was baptised on 6 May 1790, but the child did not survive and died following her second birthday on 15 May 1792.  Mary is next recorded as living with Edward Pailid (Pales), a convict transported for life who arrived on the Surprize in 1790.  They had three daughters, Susannah (1792), Mary (1794) and Ann (1798).  Pales received a conditional pardon in 1795 and an absolute pardon in 1796.  The couple were together until his death in 1802.

Mary moved out to the Hawkesbury and it was here she married John Martin (Neptune 1790) by whom she had a son Thomas born 2 April 1802.  They rented 8 acres in Windsor where they raised corn, barley and wheat.  A son Edward (died as an infant) and a daughter Sarah Susannah appear to have been born to Mary Allen and John Martin, however Mary is recorded as being a widow living at Windsor in 1814.  A John Martin died, aged 40, on 28 April 1812 and was buried at St Matthew’s Windsor.  Mary and her son Thomas Martin remained at Windsor until at least 1828, when she is recorded as age 62 and he 23. 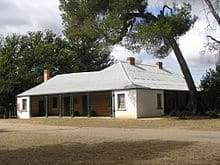 Mary’s daughter Ann was married three times, her second husband being John Richards, a builder of Riversdale Coaching Inn, built in an area known as Old Goulburn.  Ann took control of John’s businesses following his death, and later placed Riversdale in a trust for her sons.  In 1840 Ann married Benjamin Gould.

Mary Martin spent the last years of her life with her daughter Ann at Riversdale Inn.  She died, age given as 78, on 9 June 1843 and was buried in the Richards family plot 351 at St Saviours Anglican Cemetery, Goulburn.  Daughter Ann Gould, died in October 1860 and was buried with her mother.  Much of the detailed inscription on their large flat headstone, is now illegible.

Article by Helen Lucas and featured in the October 2008 Folio