John was sentenced to seven years transportation on 14 April 1785 at Manchester Quarter Sessions for stealing a steel watch chain, the property of Joseph Wardle.  Sent to the Ceres Hulk early in 1786, aged 21, he was delivered to the transport Alexander on 6 January 1787, mustered on board by Major Robert Ross in March as Reynolds, and landed in NSW as Reynolds.
It is recorded that he played the flute and tambourine well.

On Thursday 21 February 1788 John Randall married Esther Howard or Harwood, an oyster peddler born c 1758.  Esther also came on the First Fleet aboard the Lady Penrhyn, having been sentenced at the Old Bailey on 30 August 1786 for theft of a silver watch, keys and money from a drinking partner at the Wheatsheaf Inn.  Esther was 30 years of age when they married in St Phillip’s Parish.  Two other marriages were also held at the same time, all with the same three male witnesses.  Esther Howard Randall was buried on 11 October 1789, aged 31 years.  She left no issue.

Being a crack shot John was appointed Official Game Killer by Governor Arthur Phillip, and is noted as having shot his first emu seen in the colony.  In October 1788, while still serving his term, John was accused of disobedience to orders. The Judge advocate and Mr Alt sat as Bench of Magistrates. Mr Reed, Master Carpenter of the Supply and Thomas Joseph gave evidence.  Joseph was also accused of disobedience. He said he had finished his task on the 16th and had received no orders to work on the 17th  Mr Reed said he could not find Joseph at work on the 17th but that had nothing to allege against Randall, who was discharged, Joseph was found guilty and sentenced to fifty lashes. In 1800 Catherine Murphy stood charged with stealing a pound of tea and a pinafore from John Randall’s house at Parramatta in February. Her defence was that he had given her the tea after ill using her.  Catherine was acquitted.

The first wedding noted in the register at St John’s Church Parramatta is dated 5 September 1790 when Reverend Johnson married Mary Butler to John Randall.  Irish speaking Mary, arrived aboard the Neptune on 28 June 1790 in the Second Fleet.  She was convicted at the Old Bailey sessions on 9 September 1789 for stealing a basket of beans at Convent Gardens and was in the 90 Middlesex goal delivery.

On 29 November 1792 John Randall was granted sixty acres at number 92 Northern Boundary Farms, next to his friend John Martin and with similar conditions.  Mary and John Randall had a daughter baptised on the 31 July 1791 and buried at St John’s Parramatta on 13 February 1793.

On the night of 15 October 1793, when Mary was seven months pregnant, four Irish convicts with blackened faces broke into the Randall’s at Northern Boundary, bludgeoned and nearly killed two men who lived with the Randall’s. These intruders were overpowered.  Later seven Irish convicts confessed to planning to rob the Mill house, Governor Phillip house and several other homes.  Their daughter Mary was born on 4 December 1793.  She was to marry convict and neighbour John Martin when she was 19 years old; they had their first child when she was 13 years old.  A son was born to Mary and John Randall on 28 May 1797, he was baptised at St Phillip’s on 25 June 1797. 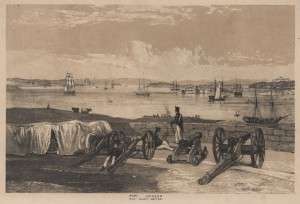 On 5 January 1811 John was appointed Constable in Sydney Town.  He resigned this position 24 August 1811. In the 1814 Muster he is listed as land owner at Code S which includes Kissing Point, New South Wales.

In the Sydney Gazette on 19 February 1814: To be sold on next Friday 25th at 12 noon at the house inhabited by John Randall at Kissing Point, sundry household items, furniture, utensils and four or five acres of growing cane, to the highest bidder.

There is no further known information on John Randall after this date, but many theories on his death or disappearance have circulated since.  Mary Butler Randall died on 29 July 1802.

History recorded by Dorothy Martin and retyped by Barry Jude Martin JP, who is a direct descendant of John Martin and John Randall